Blockchain is the technology leading the next round of business disruption. It provides a decentralized, trusted-chain of evidence, meaning the integrity of the data stored is essentially incorruptible. In fact, in many cases, blockchain provides the perfect solution… to an undefined problem. Some innovators (and investors) are still in pursuit of the perfect problem to be solved with the perfect solution they have developed using blockchain. This logic, however, is backward. We must first define the problem, then design solution options, and maybe fit blockchain into it.

The Analogy of Don Quixote

In the early 1600s, Miguel de Cervantes published a Spanish novel on the adventures of Don Quixote, an old gentleman from La Mancha, in central Spain. After reading about chivalrous ideals, he loses his sanity, becomes obsessed, and decides to ride his horse, sword and shield up, to defend the destitute against the evil. He firmly believes that his vision of chivalry can help the world get rid of the wicked. In his madness, he sees giants in windmills, takes peasants as princesses, and recognizes old men as wizards.

Recently, during a Seattle panel to discuss blockchain technology opportunities and the startup ecosystem growth, I came to realize we might be facing a similar reality today with blockchain technology. In the present case, excited tech savvy visionaries are deeply convinced that blockchain’s disruptive features can help create new business models, solve complex problems, and improve the world. On one hand, they are correct. It is the right fit for solutions requiring decentralized, trusted chains ofevidence, where the integrity of historical data is critical for the success of business operations. On the other hand, their state of mind is pushing some of them to go out in the world to try and find (or even create) problems to solve with this transformative technology.

However, I firmly believe it should be the other way around:

First, you clearly define the problem in front of you, then you go out and design solution options. In the panel’s guided conversation, we have agreed on that. Using techniques as simple and old as The Five Whys, created by Toyota’s engineers, we should question why the issues in front of us are happening, and keep asking questions until we get down to the problem’s root cause. Then, and only then, we should move to design solution options, engage the people impacted by these solutions, and prepare to make a decision.

I have to say that I tend to empathize with these blockchain innovators rushing to solve any complex problem with this holy grail technology. When I was a young solution designer, back in Brazil, more than once I incurred in similar mistakes. It was 1998 and the worldwide web technology was going to change the world for better as “no one could foresee it,” everybody had to be on the bus or risk missing the opportunity of their lives – anyone, does it ring a bell?

For those who remember, it seemed every and any problem in the world would be solved by the “web.” Like then, today’s blockchain technology can clearly disrupt many of the established industries, from finance and government to healthcare and food supply chain.

Let’s go back to the basics and work hard to identify which problems we are trying to solve before even talking about which technology to use. I am sure this will help avoid taking windmills by imaginary giants like Don Quixote. 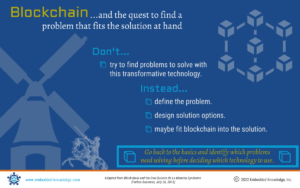 For more information about how to differentiate your tasks and problems, explore embedded-knowledge.com 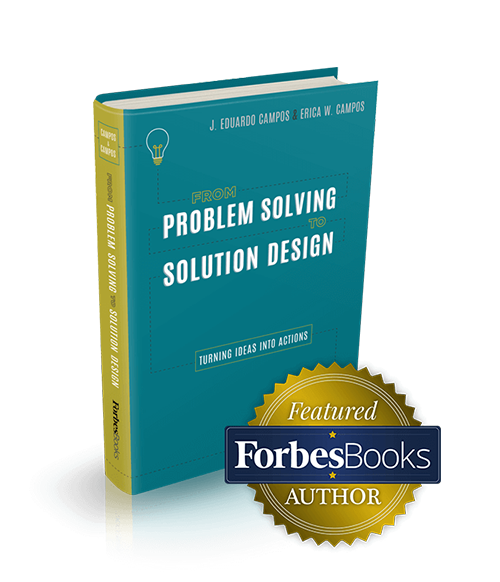 GET YOUR FREE CHAPTER TODAYEnjoying our blog posts? Get a FREE chapter of our book "FROM PROBLEM-SOLVING TO SOLUTION DESIGN"
I want my FREE chapter

This website uses cookies to improve your experience while you navigate through the website. Out of these cookies, the cookies that are categorized as necessary are stored on your browser as they are essential for the working of basic functionalities of the website. We also use third-party cookies that help us analyze and understand how you use this website. These cookies will be stored in your browser only with your consent. You also have the option to opt-out of these cookies. But opting out of some of these cookies may have an effect on your browsing experience.
Necessary Always Enabled
Any cookies that may not be particularly necessary for the website to function and is used specifically to collect user personal data via analytics, ads, other embedded contents are termed as non-necessary cookies. It is mandatory to procure user consent prior to running these cookies on your website.
Functional
Functional cookies help to perform certain functionalities like sharing the content of the website on social media platforms, collect feedbacks, and other third-party features.
Performance
Performance cookies are used to understand and analyze the key performance indexes of the website which helps in delivering a better user experience for the visitors.
Analytics
Analytical cookies are used to understand how visitors interact with the website. These cookies help provide information on metrics the number of visitors, bounce rate, traffic source, etc.
Advertisement
Advertisement cookies are used to provide visitors with relevant ads and marketing campaigns. These cookies track visitors across websites and collect information to provide customized ads.
Others
Other uncategorized cookies are those that are being analyzed and have not been classified into a category as yet.
SAVE & ACCEPT